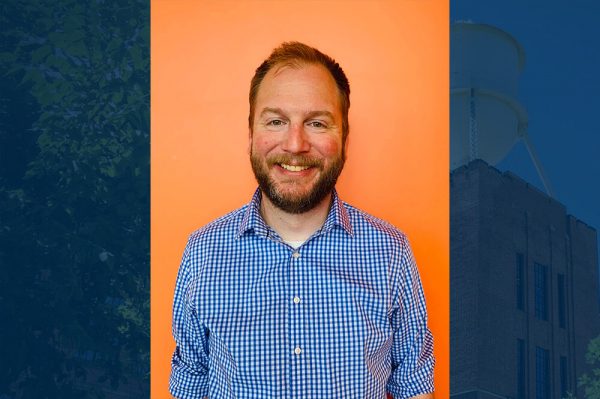 Nicknamed “The Man Behind the Curtain,” there isn’t much that Charlie Coddington, Menlo’s Director of Operations, doesn’t do. Whether it’s human resources, IT, Covid-19 planning, or transportation, he has had his hand in a little bit of everything. Since coming to Menlo Park Academy this past July, he has done it all with the goal of putting the kids first.

“Every purchase we make comes down to what is best for the kids,” he explains when asked about his purchasing process, one of his biggest responsibilities at Menlo. “When making these sorts of decisions,” he says, “I like to go past the short term and think about what the best option is for the long term benefit of the students. Especially with how quickly technology is moving, we always want to make sure we are supplying them with the correct technological tools for them to thrive.”

IT is a huge part of Charlie’s role at Menlo. It is also one of his favorite aspects as it allows him to help students from behind the scenes and also get to be a part of their school day.

“While they usually come to visit with me with technology problems,” he laughs, “getting visits from the kids is my favorite part. Every child is so polite and respectful and great to talk to. It is really such a benefit of doing operations in a school atmosphere.”

The school atmosphere is nothing new to Charlie. Before joining the world of operations, he was an elementary school teacher for 10 years in Florida. He then got his master’s in Leadership and became an assistant principal, which soon led to becoming the Assistant Principal of Operations. Five years later, he moved north to Cleveland and became the Director of Operations for Breakthrough for three and a half years before finding his way to Menlo.

“I chose to leave Breakthrough because I personally wasn’t feeling enough growth. While seeing what else was out there, I found Menlo and was impressed by the model and the culture of the school that is so different than anything else I’ve ever seen,” he explains, “They sold me on it quickly and, after a tour and an interview, I was in.”

Since joining Menlo in July, Charlie has been part of multiple projects that have helped change the school for the better. The most prominent of these, a switch in HR systems, will save both the school and employees a lot of money and time. The new system gives employees the opportunities to have more personalized insurance plans and save money by choosing a plan that works best for their lifestyle.

The money saved through this switch will flow back into Menlo’s general fund, used for student supplies and capital projects that will benefit everyone. Plans include building a “play-space” on the field, with an architect helping to design an area for the kids to learn and play. Charlie also mentions the upcoming plan of building an amphitheater for Menlo and how exciting the changes can be, “The building is new to us and allows for lots of fun opportunities to build it into what is best for a well-rounded experience.”

Charlie’s dedication to helping grow Menlo to be better each day comes both from his days as a teacher and from his own experience as a father. “Being a father myself allows me to hear parents’ concerns and ideas, and really understand what they mean and why it is so important,” he continues, “Back when I was a young teacher, I liked to believe that I understood where parents were coming from, but I know now that I didn’t. As a parent, I see that it’s totally different, and I get it in a whole new way because I can take off my ‘workers hat’ and see things from a parent perspective.”

This ability to see through all lenses, whether that’s parent, teacher, or administrator, makes Charlie Coddington both a calming and impactful presence at Menlo. The work he does touches each family, student, faculty, and staff member in ways that are instrumental to the success and environment of Menlo, even if that work does start from “behind a curtain.”