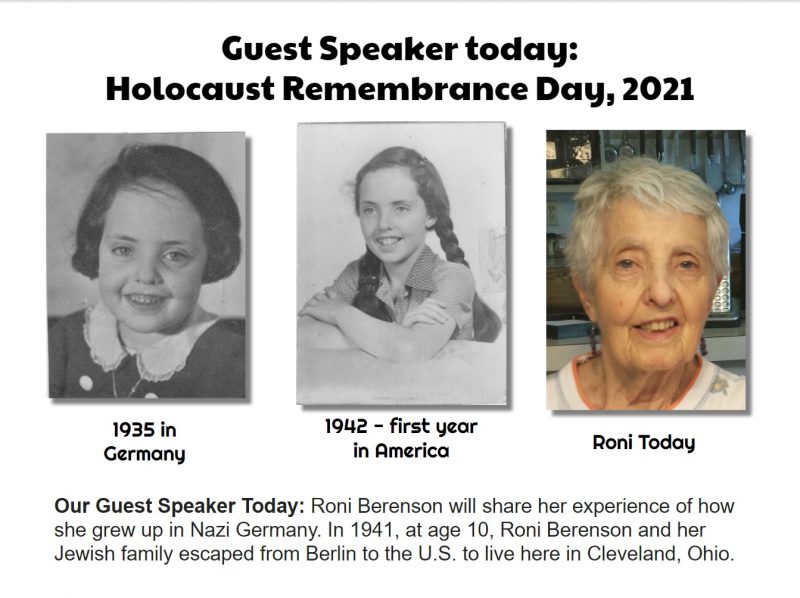 As a 10 year-old Jewish child growing up in Germany 80 years ago, Roni Berenson didn’t just see the Holocaust unfold. She lived it.

Roni Berenson’s story detailed her family’s escape from Germany, through Nazi-occupied France, and into Spain before a voyage across the Atlantic Ocean aboard a freighter in August 1941. They arrived in New York City.

“I believe there were only two other ships that left Europe after ours,” Berenson said. “(Our ship) was meant for 350 people, and there were more than 700 of us.”

Prior to leaving Germany, Berenson’s childhood in Berlin included some perilous stories of being bullied and intimidated because she was Jewish, to witnessing Nazi persecution of others for being Jewish, Black, Communist, LGBT or Gypsies.

“All over Germany, the Nazis started breaking the windows of Jewish stores, and burned Jewish temples,” she said. “My school was next to a temple and suddenly one day my mom came to take me home in the middle of a class. I was very embarrassed until she told me about the danger that they were burning the synagogue.”

“I really did have to be careful walking to my grandmother’s house, or I’d get beaten up,” she said. “Things kept getting worse. Pretty soon all Jews had to carry special IDs and passports, and had to take new middle names… We would hear about friends who had been arrested, and disappeared.”

Some of Berenon’s family managed to escape Germany — some made it to Bolivia, some to England, and some to China — but other family members and, as she learned, her friends were killed in concentration camps, only a few months after she left Germany.

Berenson underscored the lasting lesson of the Holocaust with the class, sharing a message of respect and understanding throughout society to bridge individual differences. She also urged the class to pay particular attention to conflicts that bear similarities to the Holocaust — citing ethnic cleansing in Rwanda, the persectuion of Uighurs in China, and even slavery in the U.S.

“If it can happen in a country like Germany, it can happen anywhere,” she said. “Maybe some time in the future, some of you will be among those who prevent this kind of thing.”

Students in the class also had the opportunity to ask questions.

Austin asked, “Did you know English before arriving in America?”

“I had English classes in school,” Berenson said. “The first time I got to Cleveland, I would go up and say ‘How do you do?’ because I didn’t understand how to say ‘How are you?’”

Dae Sun asked, “Were the genocide and concentration camps known within the Jewish community (in Germany)?”

Berenson said that the Jewish community in Berlin knew that “things were happening,” but the extent of the genocide wasn’t fully realized until later. “Most of them did not understand what had happened, but by the time I left, people knew awful things were happening — but people probably didn’t expect what was happening in those camps.