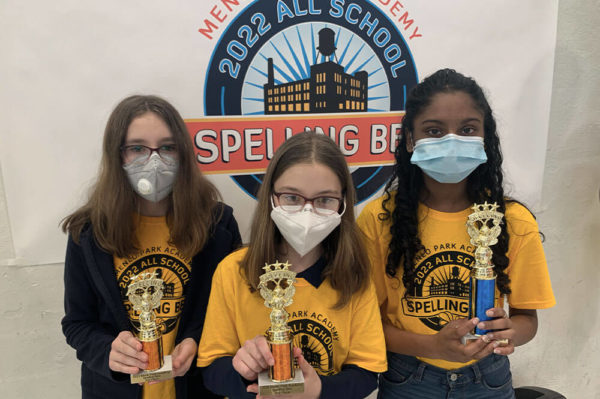 The Bee began with quarter-finals that included all qualified kindergarteners and first graders. The five, six, and seven-year-old competitors spelled out words including “frankly,” “paddles,” and “bonnet.” The top three students from this round—Aubrey M. (K), Lukas M. (K), and Henry M. (1)—advanced on to the semifinals, alongside the qualifying participants from 2nd and 3rd grade.

Advancing from the semifinals to The Bee’s final round included Zoey T. (2), Hunter C. (3), and Pravanth K. S. (3), who joined the qualified spellers from the 4th-8th grades. Hunter said, “the eighth graders were nice and cheered for me.” Upon returning to his class from the semifinals, where classmates watched the live stream, students welcomed Hunter with cheers and a poster. Gone were words like “intentionally” and “squabbling,” replaced with “repast,” “chandleries,” and “Chaucerian.”

Olivia finished in third place, saying of the final round, “I felt it went slow in the beginning, but it became fast towards the final. It was more challenging at the end.” Asked about the word she was proudest of spelling, Olivia said, “Lachsschinken.”

Sophia finished in second place, saying of the experience in The Bee’s final round, “I was listening to the other spellers and understood the words became more complicated. My confidence was boosted by the fact that my sister was on my side.” Sophia and Olivia both stated, “we had a great time and experience.”

After 19 rounds of spelling, Nakshatra became the 2022 Menlo Park Academy All School Spelling Bee Champion. Following her win, Nakshatra said, “It was very exhilarating to win The Bee! After three years of working and placing higher and higher in the spelling bee, I felt that all my hard work had finally paid off.” The winning word of this year’s competition was “capoeira,” a type of Brazilian martial art originating with enslaved Africans as early as the 16th century.

“Once again I was amazed by our students, by their depth of knowledge of word origins, enthusiasm, and demonstrated support for each other,” said Dr. Richard Hronek, Interim School Director. “Where else do you get the camaraderie, school spirit, and excitement of a competitive spelling bee with participants who are five to fourteen years of age than Menlo Park Academy,” questioned the enthusiastic administrator of Ohio’s only community school for gifted children.

Menlo Park Academy is a public school that nurtures gifted children through an exemplary program and rewarding experiences that develop the whole child. Consistently ranked as one of the top schools in Ohio, MPA offers a curriculum with innovative acceleration and differentiation options to the school’s 600 students, who hail from eight counties and 50 school districts in the Northeast Ohio area. MPA consistently receives high ratings from the Ohio Department of Education and is a regular recipient of the “Auditor of State Award.” In addition, Niche.com selected MPA as the No. 1 Charter Elementary School in Ohio and the No. 1 Charter Middle School in Ohio and ranked MPA among the top ten Ohio public elementary schools for 2022.