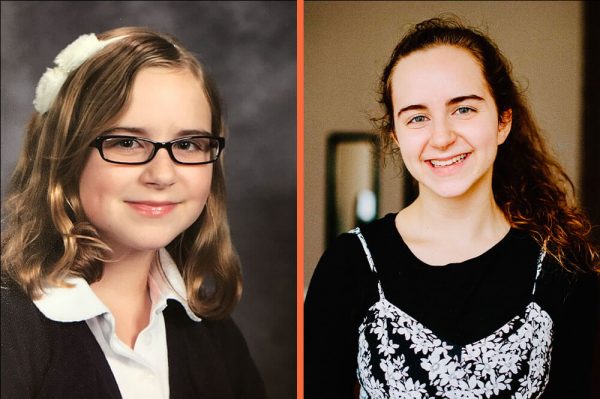 For many, a love of learning is born later in life as it grows when you see all the world has to offer. For Emily Carroccio, however, her love of learning began when she was just a child. As she sits now in a Loyola University Chicago classroom, she reflects back on how her passion for learning truly began during her time at Menlo Park Academy.

Emily came to Menlo in fourth grade, leaving behind a Catholic school and entering an environment her family believed she would thrive in. As a kid, Emily found herself an avid reader, working her way through the Harry Potter series with ease, and at Menlo, she dove deeper into the world of reading and writing by joining Mock Trial and competing in Power of the Pen. Emily found that she flourished academically at Menlo and moved up a grade after the first trimester of her fifth-grade year.

“I was already taking sixth-grade classes that first trimester, and my parents and the school were talking about moving me up in the rest of the classes, so it made the most sense for me to just move up a whole grade,” she reflects. While a grade acceleration might cause social or academic issues for some students, Emily still talks about how great of a decision it was: “I was a fall birthday so the age gap wasn’t huge and I found myself making friends with everyone in my classes very quickly. Menlo was never afraid to accelerate kids so that they’d be where they belonged and they made it a super easy transition for me.”

While the term “gifted” can take on a different meaning for each person who finds themselves falling under that label, for Emily, the word was tied to her academic success.

“Menlo was able to recognize the ‘gifted’ collection of aptitudes that each student had and help nurture them more specifically than in my public school experience,” she explains. “The staff of teachers and faculty were so committed to their job that you naturally wanted to do well and give everything a try. I felt like each teacher was there for the sole purpose of helping me grow.”

It was specifically the teachers that Emily remembers most about Menlo Park Academy, as they encouraged her to not give up on any subject and to keep exploring ones she wasn’t originally interested in. In her elementary school days, she wasn’t a fan of her science courses, but her teachers continued to give her fun and different projects to keep her involved in the subject. Flash forward almost a decade later, and Emily is double majoring in biology and dance, along with happily working in the biology lab on campus, very glad she didn’t give up on science.

When it came to choosing Loyola, Emily was drawn not just to the beautiful campus, but to the promise of a well-rounded education that was tailored to her needs. “Loyola has a large biology department and a smaller dance department which really fit the way I wanted to learn and grow in each subject,” she expands, “Especially in regards to dance, the program I am in now is hands-on and allows me to really focus on dance without the high pressure atmosphere.”

Dance has been a part of Emily’s life ever since she was a child and it was in her middle school years that it truly turned into something she loved. Her passion for it has continued to grow over the years and she now interns with the Chicago Dancemakers Forum in her free time. This past semester Emily was also selected as the only student choreographer for the Loyola fall dance concert, an honor that she humbly shared with a smile. “Dance is an outlet for me and a way to get out of my head and into my body, which is something that is super helpful in college,” she expands.

When it comes to the next steps in life, Emily is happy to take each day as it comes but does proudly share that she plans on attending grad school after finishing her undergrad.

“When I was at Menlo the teachers were always fostering our creative ideas and encouraging us to open ourselves up to new backgrounds,” she recalls, “The way that they showed us how much fun learning really is makes me never want to stop. I want to keep learning so that I can find ways to give back to the world around me.”

When asked what advice she would’ve given to her Menlo Park Academy self Emily pauses and then begins to laugh, “There are so many things I wish I could tell myself, but middle school me wouldn’t have wanted to hear any of them,” she pauses again before continuing, ”I think I would just tell her to savor it because life happens so quickly.”

While middle school Emily might not have been too keen to hear her own advice, modern-day Emily proves that she really didn’t need it at all. As she approaches her college graduation and begins the search for grad schools, Emily Carroccio leaves no doubt that she will be giving back to the world and continuing to show others the beauty of learning that Menlo Park Academy showed her.