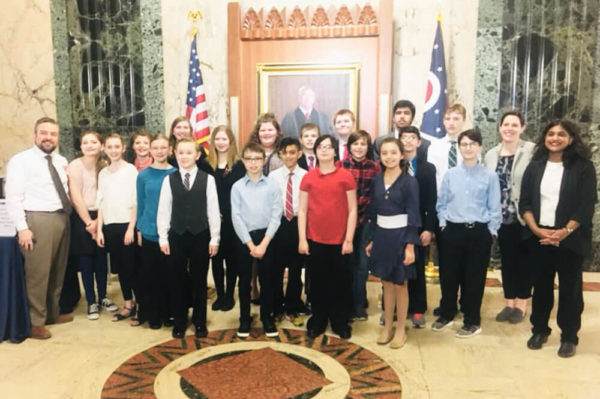 When asked what impact Menlo Park Academy’s Mock Trial team had on them growing up, alumni from each generation of Menlo students came out of the woodwork, eager to talk about a program that meant so much to them during their middle school years. However, they also jumped at the chance to rave about their past coach, Latha Srinivasan.

“Honestly, participating in the Menlo Mock Trial was one of the best decisions I’ve ever made,” says alumna Navya Chauhan, who was on the team from 2018 to 2020. “The coaches are extremely friendly, amazingly talented, and devoted to teaching the middle schoolers. Coach Latha Srinivasan was an excellent teacher and was super passionate about the club.”

“Passionate” would be an understatement for Latha Srinivasan’s feelings about Mock Trial. She has dedicated a portion of her life over the last ten years to making the program an award-winning staple at Menlo and a favorite among the kids.

“I started the Mock Trial team along with Erin Armstrong in the 2012-2013 school year,” Latha begins, “Back when Menlo was a much smaller school, they invited parents to teach electives or to offer elective ideas. I am a practicing attorney and proposed an idea of a Mock Trial elective, which I went ahead and taught for the following weeks. I was so amazed at how quickly the kids caught on to the material and when the trimester was over, both the kids and I were so sad that we didn’t get to do more with it. That’s when Erin and I started researching middle school Mock Trial competitions and came across a statewide showcase competition that is hosted by the Ohio Center for Law-Related Education. We decided to create a team and have been participating in it ever since.”

To those unaware of how Mock Trial works, it combines literature and argument to allow students to become fluent in the world of modern-day law and court procedures. Students also master presentation, public speaking, and persuasion skills. Each year, Menlo’s Mock Trial team receives its “case” to prepare for the showcase at the end of the year. This case is delivered and formatted like a real court case; it includes a case summary, trial briefs, and witness statements. The students practice for months, acting in their roles as either witnesses or attorneys, to prepare well-developed arguments for both sides of the case. The team also works on strategic questioning for their witnesses.

All this hard work pays off for the Menlo teams each year as they have earned high marks throughout their years of competition, getting an “Outstanding” team ranking seven times and a “Superior” team ranking four times. “Best Attorney” and “Outstanding Witness” awards presented at each competition spotlight individual students for their stellar performances during their case.

More rewarding than trophies and awards are the skills the kids learn along the way. Madeleine Nowakowski, who went to Menlo from 2015 to 2020, attributes her current career path to her time on Mock Trial and what she learned while being on the team as both a witness and an attorney.

“My very favorite part about Mock Trial was being on the stand. I liked incorporating acting into my role as a witness. It was exciting to be well versed in the case, the laws behind it, and the logic that built the reasoning behind our argument,” says Madeleine. She continues, “My logic and reasoning skills greatly increased through my Mock Trial experience. The knowledge of the case process and how to examine a case has helped me in high school. I am even participating in a Law Track at my school and have started taking law classes.”

The growth of Mock Trial throughout the years speaks to how easily it fits into the Menlo culture and what a fun outlet it has become for the kids both socially and intellectually.

“There was a point in time in the early years where we would have to beg kids to join the teams,” Latha recalls, “But now we have to hold official auditions to fit the team restrictions we have to follow. We’re allowed two teams of twelve per school based on the OCLRE rules, and it is insane how many kids show up to auditions ready to work and give it their all.”

At the beginning of each school year, Latha and her fellow coaches hold an information seminar for kids and parents to learn more about Mock Trial and what it entails. Then, once the audition process ends and the team forms, they meet every Friday after school from 3:30 PM – 5:45 PM to perfect their case.

“Menlo kids are perfect for this program because they are such hard workers and the growth I see in them, not just in one year, but in their three years on the team is crazy. They learn not only how to take constructive criticism, but also how to give it and when we get toward the end of the season they get so upset when I have no more notes,” Latha laughs, “I’ll tell them it’s perfect and they’ll go, ‘No it’s not, there has to be something!’ It’s just so awesome for me to see as a coach how they grow from being afraid of criticism to craving the feedback.”

Through the years, Mock Trial has grown to become a vital part of each child’s life, and the skills that Latha and her fellow coaches instill them long past their time in the program. To anyone interested in Mock Trial, the Menlo students who participated cannot stress enough how glad they were to have had it become a part of their Menlo experience.