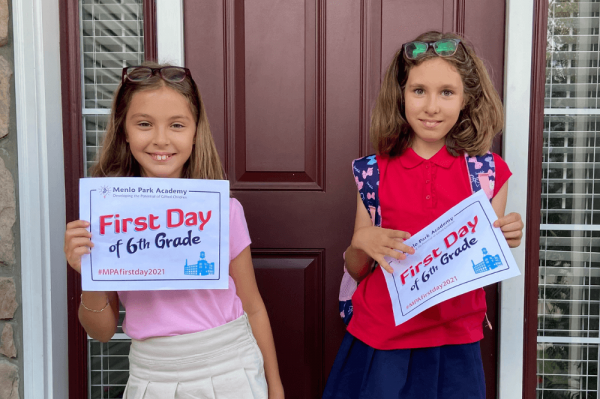 For Adriana Panciu, her biggest love and priority will always be her children. As a mother of two gifted twin daughters, everything she does aims to ensure they are seen and put in an environment that best suits their needs. This is why, when the family learned that their daughters are advanced in their academic and emotional abilities, they turned to Menlo Park Academy to give them a meaningful and tailored education.

“The concept of teaching to the child, and not to the class, is what attracted us to this school,” Adriana explains, “Most school programs suggest that giftedness is not identifiable until middle school or later. Menlo takes a different approach by identifying gifted children earlier since the earliest school years are the most important for finding these kids before their joy for learning is gone.”

That joy for learning is exactly what Menlo lives to encourage. Whether it is its before- and after-school Edison Club, Spelling Bee, or Science Fair, Menlo constantly takes fun and different approaches to helping its students grow and learn outside of the classroom. These unique teaching styles helped the Panciu girls feel accepted academically and socially.

“Our daughters felt welcomed in Menlo’s environment of gifted children,” Adriana shares, “They have thrived in the atmosphere of consistent passionate teaching. Since their academic needs were not approached as ‘different,’ they were able to find many similarities with their peers.”

This “consistent passionate teaching” that Adriana sings praises of comes from a staff purely dedicated to the success of her daughters and children similar to them. Dr. Sylvia Rimm, in particular, has had a huge impact on the Panciu family’s Menlo Park Academy experience.

“Menlo has the privilege of utilizing the expertise of Dr. Sylvia Rimm, who is a nationally recognized psychologist with 40 years of experience, 12 years at Menlo, 50 articles on her website, and 20 books on giftedness,” Adriana says. “Through Dr. Rimm’s work with gifted children and by means of a solid curriculum and dedicated teachers, Menlo is coaching our children on how to deal with both successes and failures, teaching them social skills so they can succeed in the world, and helping them understand that giftedness comes with special skills but also with special obligations and responsibilities,” she adds.

These passionate and honest conversations with Menlo staff, specifically Dr. Rimm, about what is best for their daughters, are what led the Panciu family to the idea of their girls accelerating a grade.

Six years ago, before the girls started kindergarten at Menlo, they were tested by a psychologist as part of Menlo’s acceptance process. The testing highlighted that they were ready to skip Pre-K and start Kindergarten. Flash forward a few years, a third-grade teacher recommended skipping fourth grade at one of the parent-teacher conferences. After, the Pancius met with Dr. Rimm to discuss the process of skipping a grade level and the idea of acceleration by subject.

“The grades, state tests results, and the emotional implications of doing one of these options have been dissected and explained to us and the concept of challenging our daughters academically was presented,” Adriana says when asked to share a bit about the grade acceleration process.

“We then decided to accelerate them in two subjects and were given an individualized plan that allowed us to form a partnership with the teachers. This year, however, we decided to allow them to skip a full grade as initially suggested by Dr. Rimm. It was a simple process, and we are happy with the way this was handled by the school and our daughters.”

The relationship between Menlo and the Panciu family has only grown stronger through the years. Adriana is vocal about how her daughter’s time at Menlo has helped them see education “through a different lens,” one not tainted by the “norm” of standardized learning and distinct age gaps between grades.

“Since most children move up or to another class regularly enough at Menlo, it is not strange to have a younger kid in an older class,” Adriana expands,” “The older children do not ridicule the younger ones in any way. On the contrary, they respect and encourage them.”

The dynamic environment that Menlo offers, one that mixes both acceptance and academic challenges, is the reason Adriana Panciu would recommend Menlo Park Academy to any parent wondering what the best fit is for their gifted child.

Adriana closes out her family’s Menlo story with encouragement as she shares. “If you know your child is gifted, you should also know she cannot make it on her own. You need a school like Menlo that offers something beyond the regular curriculum. It is as simple as ‘Go for it! You will not regret it!’ I would want any parent to feel empowered and confident in making their decision and know that Menlo will help their gifted child achieve an excellent education.”