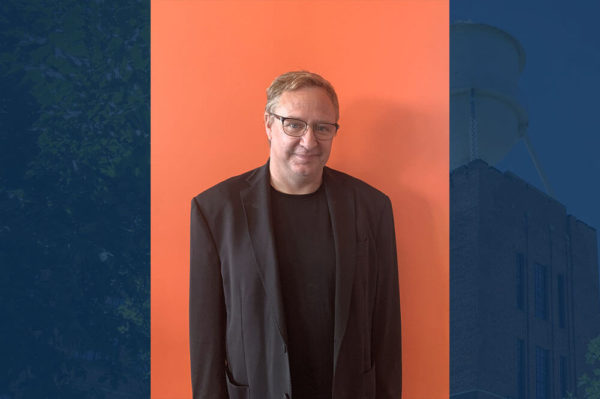 If you were to be a fly on the wall in Sean Wheeler’s classroom, you might not even think it was a classroom at all. You wouldn’t hear the typical scratching of pencils or the typing on laptops that usually echos throughout school buildings, but instead the noises of what big questions and creativity sound like as they bounce off the walls. Mr. Wheeler’s classroom isn’t a typical “by-the-book” classroom, and that is something he takes pride in.

In his first year at Menlo Park Academy, Sean Wheeler teaches honors and high school credit English classes for middle schoolers. His academic subject, however, is just that—a title. Mr. Wheeler does not limit his teaching to simply assigning novels or grading papers. If you were to sit in one of his classes, you would see how he works to embed real-world lessons and skills into his students. To Mr. Wheeler, learning should be about personal growth, not letter grades or points.

“I have stood up at conferences nationwide and said that I don’t use a point or grading system and that I’ve never assigned a novel. Of course, this sounds crazy coming from an English teacher,” he laughs, “but it’s because I don’t want to make learning into a job. I want it to be something the kids can thrive in.”

Mr. Wheeler attributes this attitude to his student teaching experience during college, remarking, “I had an incredible student teaching experience where I shadowed a teacher who told me that to be a good teacher, you need to care about the kids more than anything. Make every single minute that you have with them count because they deserve the most out of their education. I now look at my students and know that I always owe them more than they’ll ever owe me, and it’s a big part in why I do things the ways I do.”

In the classroom, Mr. Wheeler wants the kids to sense themselves becoming better at things, not by improving their letter grades, but by genuinely feeling themselves become confident in their writing skills and in their ability to persuade. The ability for kids to use words, emotions, and ethics to persuade others is a skill he wants his students to have for the rest of their lives, and he believes the best way to teach that is through doing.

“I want my grading to be self-evident. Before they couldn’t do it and now they can. The goal shouldn’t be going through the motions but instead to be so in touch with writing and reading that you want to use it to express yourself.” He elaborates, “I want to allow them to give back to the world through their learning. There is so much talent in these students at Menlo and instead of having them just mimic the work of others, they should learn that they are capable of creating their own.”

Right now, Mr. Wheeler’s students are working on podcasting and partnered up with the hit podcast, “Everything is Alive.” The students are creating an entire episode of the show themselves, with each student playing a role in producing or acting in it. Eventually, the students plan to turn it into a live show and create their own Menlo Park Academy podcast. This project allows the kids to learn everything that the state standards require of them, but in a context where it will stick with them longer than just through an exam.

“The main thing I want the kids to know is that the audience shouldn’t be just me. I already know how smart these children are, and I am constantly blown away by them,” Mr. Wheeler smiles, “What is powerful is for the students to get the chance to do actual learning, out loud, for other people to see. In the future, I want to rent out a performance hall for 1,000 people and let the kids decide what is going on in this hall and determine what it is that 1,000 people need to hear. They’re going to create something real, something that is bigger than just turning in a paper to their teacher, and they’re going to know that they can do it.”

In the meantime, Menlo’s “Power of the Pen” team and the Literary Magazine, both of which Mr. Wheeler helps to administrate, offer two ways for Menlo students to take their English skills into a non-traditional setting and express their creativity. “Power of the Pen” allows the students to use descriptive writing and learn how to respond to prompts on the spot, all while tapping into their competitive side. With the Literary Magazine, new to Menlo this year, students get to work together to prepare a 100% original student work magazine that will get published annually for their families to keep. These extracurriculars give students an outside-of-the-box opportunity to use their learning to create real, tangible things.

“At the end of the day, the curriculum isn’t what they keep with them for the rest of their life, it’s the patience, curiosity, wonder, love, and an appreciation for beauty. So I try to not only teach their minds but help teach their souls,” Mr. Wheeler continues, “Not souls in a religious sense, but I want to teach them to see past their academic end and to love to learn. Ultimately, what matters isn’t their grades, but their lives and their futures.”

Today, many students—especially our gifted students—face pressure to get good grades, striving for As and perfection. Sean Wheeler is very in-touch with this. While he always makes sure his students can earn As, he hones in on helping students look past a grade and instead focus on the knowledge gained to prepare them for a life where things can get tough. This philosophy that Mr. Wheeler imbues in his teaching may not make him your “traditional” teacher. For his middle school students, it instead makes him a great teacher and one they will never forget.