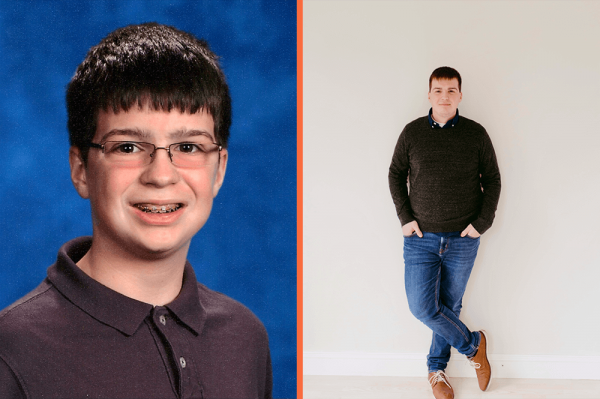 When Dylan Zsigray walked into Menlo Park Academy as an incoming sixth-grader he felt something that he had yet to experience in a school setting; he felt seen. Dylan, now a student at Cleveland State University, where he will be graduating early, looks back on his time at Menlo Park Academy, not only with happy memories but also with emotion.

He first entered Menlo in sixth grade, leaving behind a public school that was anything but kind to him. Dylan talks openly now about the struggles he faced in his elementary school years and the way his disconnect from his peers led to relentless bullying. His public school years had left him feeling inferior and small, broken down by other kids who viewed his talents and quirks as vulnerability. His years at Menlo, however, shifted the course of his school experience and his mindset for the better.

“Menlo gave me a renewed sense of self,” Dylan explains, “They put me in an environment where I was around like-minded individuals. Gifted kids tend to be very quirky with different traits that set them apart, so when you’re all quirky and in an environment made for that, you stop feeling ‘inferior’ and start to feel ‘normal.’ That mentality that was ingrained in me at Menlo during my three years really taught me the value of self-worth.”

Whether it was collecting teachers’ attendance sheets every morning or speaking at the “State of the School” address, Dylan did indeed thrive at Menlo Park Academy. The faculty had him nicknamed “The Mayor of Menlo” and he recalls the relationships he built with the staff to be some of his most valuable, a trait that continued well into his high school years.

After graduating from Menlo Park Academy, Dylan went on to attend St. Edward High School, where he found himself working for several of the school’s departments during the academic year and through the summer. It was during his senior year at St. Ed’s that he first branched into the world of freelance creative work. Using the tag “DZCreative,” Dylan began helping small businesses with digital marketing and design. This original side hustle soon grew into “Spark Creative,” a digital marketing agency owned and run by Dylan all before his 21st birthday. Spark Creative grew rapidly in 2020, allowing Dylan to work with other small businesses and continue to expand his platform. Spark Creative even gave Dylan the chance to give back to his roots and this past year he helped run a digital marketing audit on Menlo Park Academy.

“It was really cool being able to give back to Menlo because they gave me a place to feel safe and at home.” Dylan expands, “I want to help Menlo Park Academy grow so that other kids who are struggling in public school, or who went through what I did, can learn about it and find solace at Menlo.”

While Menlo Park Academy gave Dylan what he referred to as a “home” for three years, it also helped spark interest in passions he still carries with him.

Dylan is now the Screening Team Lead for the Cleveland International Film Festival, which allows him to indulge in his passion for film, a love that began in a Menlo classroom. “I had a history teacher in sixth or seventh grade who taught a unit on Bollywood cinema,” he recalls, “and as an extra credit project we were able to create our own movie.”

This project for Dylan brought him a newfound love of film and film analysis, which is something he continued into his time at St. Ed’s where he submitted a film that ended up in the Cleveland International Film Festival. This compounded into him becoming a judge for the festival his freshman year of college, and now being the Screening Team Lead.

This love of film is something he plans to build on in his post-college years, and as he nears graduation this upcoming December, he shows excitement over being able to devote more time to his multiple professional and personal passions. He plans to dedicate more time to growing and nurturing Spark Creative so that he can continue to expand his clientele organically. As previously mentioned he will be continuing his work with the film festival, along with allocating more time to working with the St. Kizito Foundation, a nonprofit for which he serves on the board. The St. Kizito Foundation works to fund education for Ugandan children and Dylan is passionate about getting the word out more in Cleveland and surrounding areas.

As the post-education world comes closer, Dylan reflects on what he would tell the middle schooler who walked into Menlo Park Academy almost a decade ago. “I wish I could go back and tell him to breathe,” he says with a laugh before elaborating, “I feel most gifted children are perfectionists and we worry a lot about what’s going to come next. If you keep looking ahead you’re going to miss where you are. I know now that I was on the path to success the whole time and you have to let the cards fall where they may because every time I tried to plan out every detail out it would always fall apart.”

Dylan made it clear that within Menlo he found a home that “saved him” and made it so that he could be here today. The self-worth he found at Menlo Park Academy allowed him to become a successful and confident young man who “lets the cards fall where they may” and is all the better because of it.