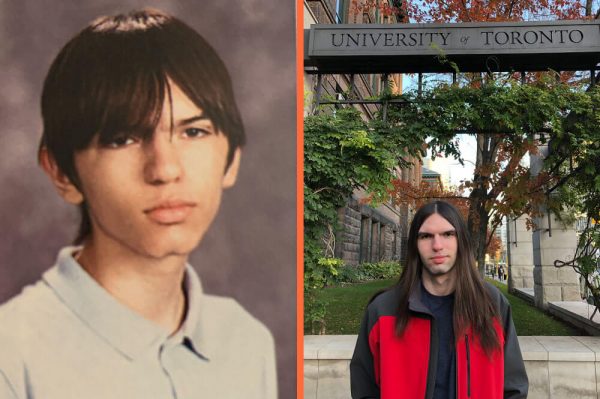 Mason Buchanan has spent his entire life traveling: bouncing from Canada to Cleveland, Las Vegas to Texas, back to Cleveland, and onto Toronto. Out of all these places he’s called home, one of his favorites is Menlo Park Academy.

Mason came to Menlo in the 7th grade upon returning to Cleveland. He remarks that after being homeschooled for seven years up to that point, the return to an academic schedule was weird. “I wasn’t used to the feeling of having to go to bed early for school in the morning, or of learning in a classroom with others as opposed to just myself,” he explains, “While the first year was definitely difficult, by 8th grade I was so excited Sunday nights to get back to school and be back with my friends. I genuinely don’t think I would’ve done as well in my transition into a regular school environment if I was somewhere else. Menlo was so small and tight that it felt like every individual thing had its place, and that included me. While there are still smaller friend groups like in a normal school environment, I got to be a part of one and it was really special.”

Mason recalls this group of friends with no issue, the names flowing off his tongue as if he had just left a Menlo classroom earlier that day, and the stories of their times together even fresher. He laughs fondly about the times they spent drawing comics and making up stories for them, creating a whole mini-world in the back of Menlo’s auditorium.

However, it wasn’t just his peers that made his transition into schooling enjoyable. He praises his teachers for always encouraging him to take control of his learning. “Menlo made sure to make me comfortable with the idea that you don’t have to be at the same level in everything at the same time. In high school, I found myself drawn to Spanish but was stuck in the required class levels. So, I took it upon myself to learn it on my own time,” he continues, “I picked it up rather quickly and became fluent. This was great for undergraduate studies because I had the opportunity to live in Madrid with a Spanish-speaking host mother and study Physics entirely in Spanish.”

Mason completed his undergraduate degree at The Pennsylvania State University, where he received a Bachelor of Science in physics with a minor in mathematics. At Penn State, he had the opportunity to do program work analyzing simulations of light particles from space hitting a detector on Earth. Additionally, while at Penn State, he looked beyond Spanish for something new and picked up Japanese on the side for enjoyment. Even further, this led him to pick up French as well! He subsequently applied and received a full grant to study for a year in Brussels, Belgium, another French-speaking city.

While the pandemic did throw a wrench in Mason’s ability to study in Brussels, his fluency in French is serving him well as he works towards his doctorate in physics at the University of Toronto. 2021 marks his first year at the University of Toronto, where with his previous programming and simulation experience, he wanted to work with hardware and broaden his palette.

While he has only studied at the University of Toronto for a few months, he has already played an integral role in designing and testing projects. For the past few weeks, he’s helped draft 3D models of a detector that will identify dark matter in an underground mine in northern Ontario called the “Snow Lab.” As his work with this project continues, he looks forward to the new skills and experiences he will gain along the way. Nevertheless, no matter the country Mason finds himself in or how much he has accomplished, he never stops drawing from his roots.

“One of the biggest things I took from Menlo was definitely my confidence. Confidence in public speaking, yes, as I have to be comfortable presenting and sharing my work all the time. But, also confidence in myself and in pushing myself to what I know I am capable of,” he smiles, “What still sticks with me is how Menlo always taught that you can learn as many different things as you want and that there isn’t a box you have to put yourself in for an education.”
As Mason continues with the next steps in his academic journey, he thinks about the first step in it fondly, “If I had to tell myself anything back when I first got to Menlo, I would say, ‘This place is going to serve you really well and you are going to be so happy you’re here.'”