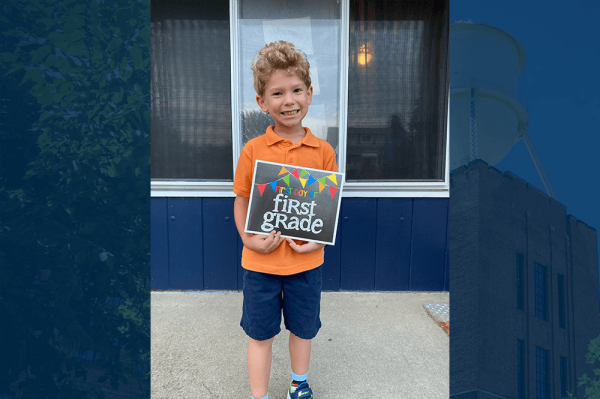 At age 6, entering his first-grade year, Henry Molnar already finds himself with many passions in life. Whether his love for baseball or excitement for amusement parks, Henry is a child who loves to have fun. Henry is also a child who has never experienced school without COVID-19. While the dual virtual and in-person learning during the 2020-21 school year could be disruptive for some, Henry thrived under the care of Menlo and its dedication to doing what is best for its students.

Henry’s parents recall the road bumps of the past school year, their family’s first at Menlo, with praise for the transparency and understanding of the school. “With everything that was going on with COVID-19, Menlo was still able to keep the parents and families as their first priority. Along with the online curriculum, Menlo gave families the option to have their kids come to the building to do the online school so that they could still be assisted and help them to focus. They were aware that each family had its own situation and made sure to accommodate them,” the Molnar’s continued. “When it came to COVID cases as well, they were always extra careful and clearly putting the health of the community above anything. We were always kept insanely in the loop,” they added.

Due to the restrictions and health precautions, Henry’s first year at Menlo wasn’t normal. However, that didn’t stop him or his classmates from making the best of it. Henry was one of only eight children physically in the classroom, but as an only child at home, this was still a huge shift for him. While he used to be nervous at times about speaking up, the smaller class sizes allowed him to slowly ease into the world of school and receive encouragement from his teachers, even if that encouragement had to be at a distance.

“We did see a change in Henry and how he was quicker to speak up in class and in front of others after starting school,” Mrs. Molnar explained, “He would come home excited about the art projects he got to do that day and I would start seeing videos of him explaining science projects during online class with confidence. Seeing that was a sigh of relief because then we knew we had made the right choice for him with Menlo.”

The Molnars learned about Menlo Park Academy through a family friend a while ago but only really looked into it when they were researching programs for Henry’s upcoming kindergarten year. They reside in the Cleveland area and had trouble finding schools that didn’t want to merely accelerate him.

“We really just wanted him to be a kindergartener,” Mr. Molnar explains, “All of these other schools wanted to have him skip right to first grade, but we were looking for something that challenged him, without having to push him to grow up. At Menlo, I have seen Henry be challenged and also be a kid, they match their ability level without making him be older than he is.”

Menlo made sure to adapt to Henry and his family academically and socially. Indeed, it was also Mr. and Mrs. Molnar who found a new community. During a small end-of-year party for Henry and his classmates, the Molnar’s met other parents who understood having a gifted child. They knew how the children’s brains work and what it is like to always make sure you’re doing the most you can for them. To other parents of gifted children who would be considering Menlo or other gifted programs, the Molnar’s advice always goes back to putting your child first.

“If you know that your child is advanced or gifted, do what is best for them. Find a place that will keep your child challenged and excited about learning. Menlo is an environment where their sole focus is addressing gifted children and their needs, their engagement is the first priority, which is why Menlo was our choice,” Mrs. Molnar explains, “They don’t focus just on the academic parts either. They have so many different options that allow them to be creative and find things that interest them and learn how to utilize those.”

In an environment such as Menlo, there is no doubt Henry will continue to use his inventiveness and excitement for the fun in life (such as a good roller coaster thrill) to build on his school experience. Plus, with a mostly normal school year ahead, he is excited to be returning to the classroom and ready to be back with his friends.